The internet is still down at Logan House… I ran in with the gentleman who was supposed to fix the internet, but because the two wardens of the residence were not present, the gentleman refused to follow the directions to the main university building and speak to an authority there. I even tried to coerce the gentleman by saying how hard it is studying abroad without internet, but he was not falling for it.

Until the internet is fixed, I am doing blog posts of the day previous to when I am actually posting. So, I am blogging about Day 17, but technically, it is actually Day 18.

So on Day 17–yesterday–we revisited The Sheldonian Theatre and it was open! The last time the class went, it was closed. The inside was absolutely beautiful, but it was laid out more like a court than a theater. The lack of visible beams in the building contributes to the overall pleasing aesthetic. The group also walked up the stairs and saw the view from the cupola. It was not as  encompassing as the view from the Carfax Tower in regards to seeing Oxford from an aerial perspective, but still beautiful.

I forgot my camera during class, so I will redirect you to a link of the Sheldonian Theatre.

For dinner, my roommate and I organized a group of students to try The White Horse on Broad Street. Like every other pub in town, there is a sign claiming the pub had “the best fish and chips,” so naturally almost everyone ordered the fish and chips. To the pub’s credit, the dish did taste really good.

I think it is funny I have now been to The White Horse here in Oxford, but not the one in Newport five minutes away from the university.

After The White Horse, we stopped by Lamb and Flag. There was a quirky clock that had the numbers reversed on its face… 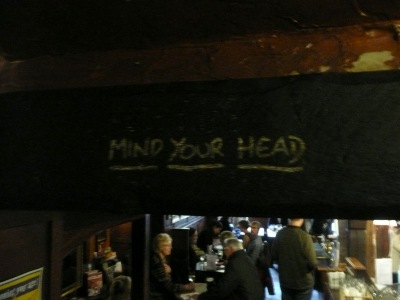