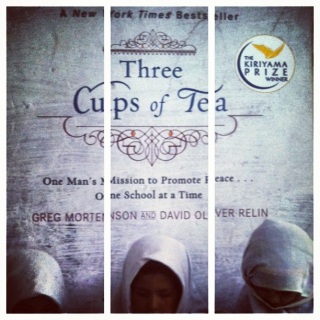 Education–it is the most precious good the United States. Education is responsible for the technological innovations that put our country in a powerful global position.

Not corn fields. Not reality television. Not even Fords.

Without the knowledge and understanding of others, as well as ourselves, the world is at a standstill. We cannot hope to make a difference if we do not take the steps to become open minded individuals who seek a well-rounded education of the world.

Americans have the privilege to continue a lifelong discourse with education.

Some nations do not have the resources to provide their people education–a fact mountaineer Greg Mortenson learned while he was trekking in the Himalayas. He was touched by the destitute way of life mountain villages led. Yet, despite the absence of material wealth, what the people wanted most were schools to educate their children.

In Three Cups of Tea, Mortenson and journalist David Oliver Relin chronicle Mortenson’s arduous journey from mountaineer to a philanthropist in Pakistan and Afghanistan who builds schools that educate children with a secular, balanced curriculum. The reader follows Mortenson’s struggles through the mountains, the sleepless nightshifts at the hospital trying to raise money, writing hundreds of letters to possible donors, visiting remote Himalayan villages, bartering for reasonably priced materials with merchants, and even a mysterious kidnapping.

But the reader also witnesses the beauty of the mountains, the strength of village communities building better futures for their children, and the resilience of Greg Mortenson’s character to work through the rough patches and persevere.

Three Cups of Tea captures a vivid picture of the Karakoram Mountains in Pakistan and Afghanistan during the 1990s and early 2000s. Anyone who interested in learning more about that region of the Middle East– or wants to read a tale of what it means to make a positive difference–is highly encouraged to read this book.

If you like Three Cups of Tea, Mountains Beyond Mountains by Tracy Kidder is also a great read.

In case you haven’t heard, Emily in Paris will return with *two* more seasons 🎥🇫🇷 My opinion? Love it or hate it, it’s good entertainment ➡️ link in bio for latest blog post 📝
Happy New Year from the kitchen at Casa del Marrosso ✨💫 Cheers to a year filled with health and happiness
New York City Christmas but make it fashion ✨🎄
More holiday cheer from last weekend in the city ✨🎄 Shoutout to @consumingcouple for the recommendation!
I managed to cross off a serious NYC bucket list item—ice skating at Rockefeller Center without falling on my face! Our skating hour ended watching another couple’s very romantic proposal on the ice ➡️
The neighborhood understood the assignment 🎄 Swipe to pick your favorite ➡️ 🏡