Moret-sur-Loing is more of an unsung tourist destination compared to other cities and villages outside of Paris.

The palaces in Versailles, Fontainebleau, and Chantilly may be considered as more exciting with their opulent displays of royal wealth. Naturally, the main tourist attractions will be primary objectives for those visiting Paris for the first time, which is totally reasonable since there’s a reason why they’re popular. But if you are looking for somewhere different to explore outside of Paris, take the time to check out Moret-sur-Loing. The town is small and easy to explore in a day without a set plan.

The town is a 45-minute train ride away via Transilien N  or the R from Gare de Lyon—Gare de Montargis will be the terminus destination. Gare de Moret Veneux Les Sablons will be the stop—be prepared to either figure out the bus to Moret-sur-Loing or walk 15 minutes to the town center along the sidewalk. 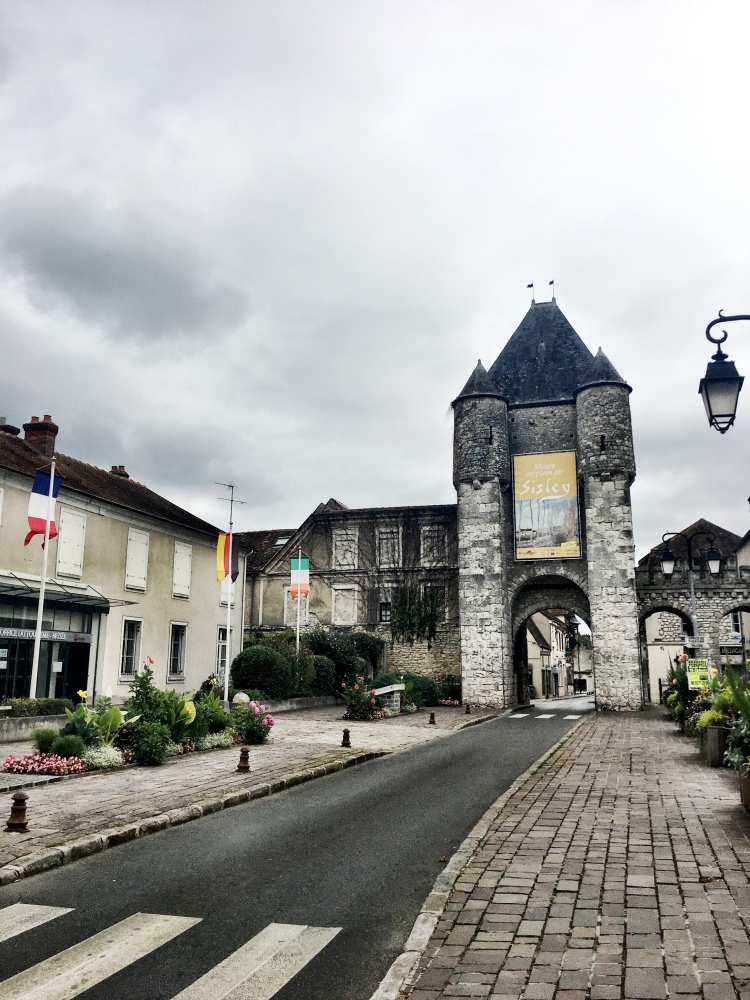 The town hall is as quaint as any other French medieval building, but there’s a site to see at the rear entrance in the courtyard…

La façade François Premier was once part of Hotel de Chabouillé built in 1527. The story goes that Colonel de Brack moved the original house during the early 1800s to Paris for his love, actress Anne Boutet. Not only did the building suffer damages in the process, but the couple never had the chance to live in the home because of “reversed fortunes.” The façade returned to Moret-sur-Loing in 1956. 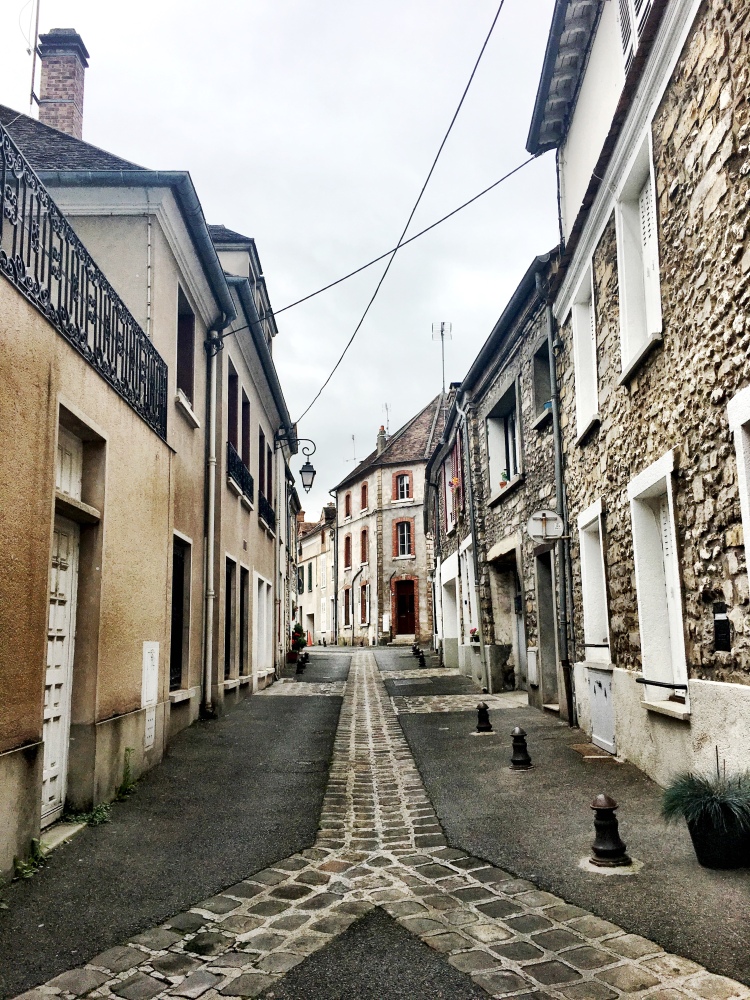 I  definitely spent a solid 30 minutes taking pictures all over this bridge. When you Google “sisley moret-sur-loing,” this is the bridge. It’s slightly different than what it was during Sisley’s time in the late 1880s—there are cars and a stoplight that I’ve been careful to exclude from the photos.

If you want the view that Sisley painted, walk across the bridge, take the road on the left towards the Musée du Vélo (Bike Museum) and then you’ll see an open green space along the river after Bistrot de Loing. The view also gives a nice perspective of the medieval town center. 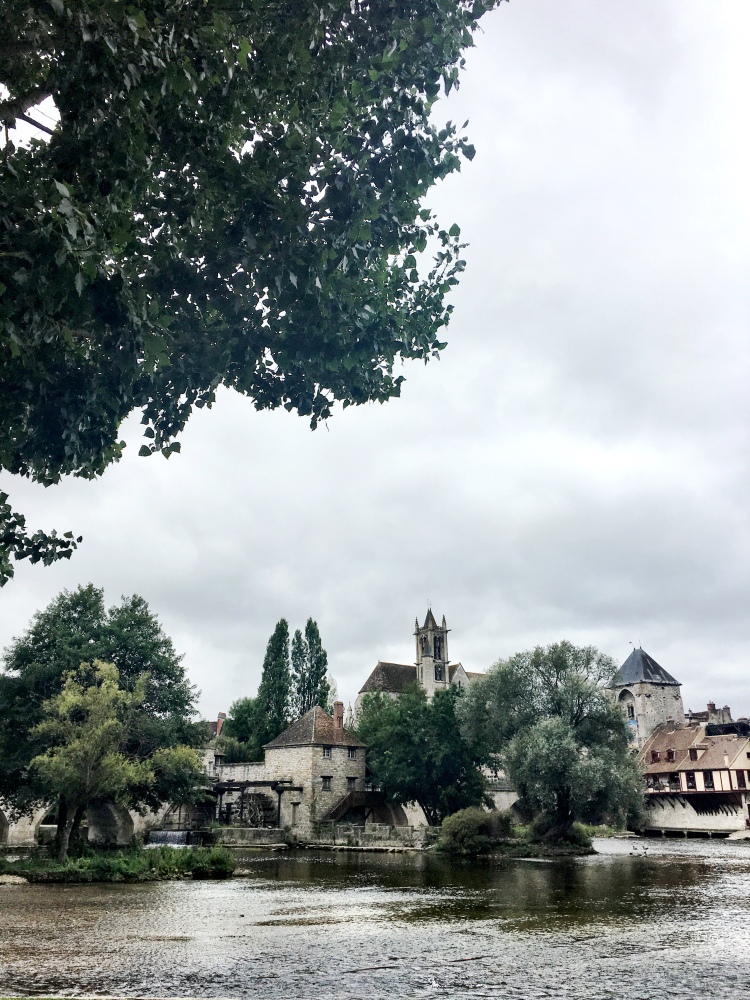 I never would have suspected that there would be a museum dedicated to sugar barley in Moret-sur-Loing. According to the town’s history, the Musée du Sucre D’Orge des Religieuses was created in 1638, under Louis XIV, by the Benedictine Sisters. The recipe remains a secret today. 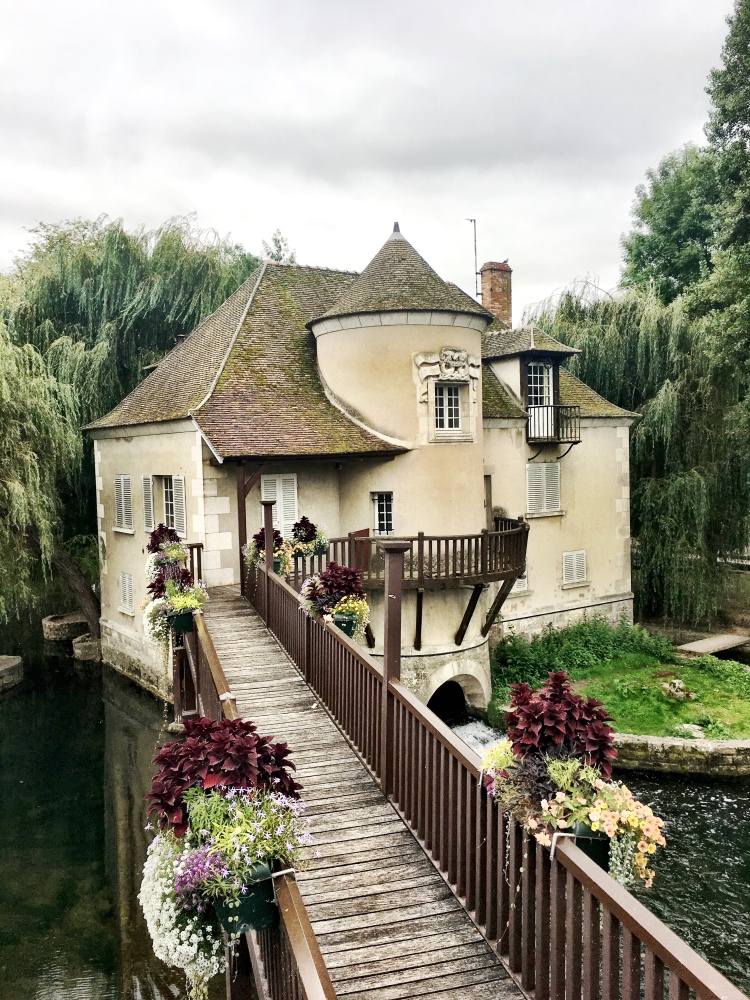 I forgot what the plaque said, but it was short. I’m pretty sure this is a standard mill—if you visit and find there was more significance, feel free to let me know.

Sisley featured this cathedral in a number of paintings. Unfortunately, the cathedral was under renovations when I visited—the front scaffold wasn’t the most aesthetically pleasing which explains the more distant shots.

Built between 1128 and 1154, the Roman style dungeon has changed purposes throughout the centuries. Le Donjon de Moret-sur-Loing switched from being a prison, then to a residence, then back to a prison before it stayed a residence that changed hands between nobles, merchants and an architect through the early 20th century. In 2006, the dungeon was restored by architect Louis Prieur and remains a family residence.

One of the things I loved about Moret-sur-Loing was how there were a decent amount of historical plaques throughout the town. I walked down a stairway near the donjon which led me to the end of this street. It turns out that Sisley painted all corners of Moret-sur-Loing—it’s incredible to see how the town has changed, yet also stayed the same, since his lifetime. 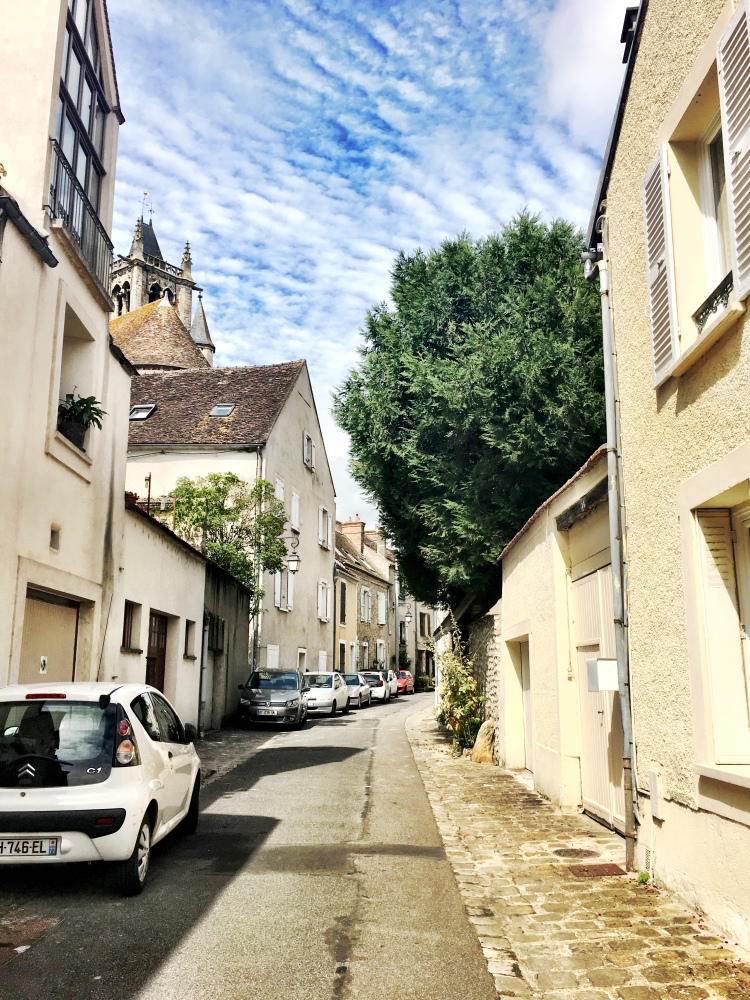 Other artists were attracted to Moret-sur-Loing, including Russian poet Marina Tsvetaeva. Originally from Moscow, Tsvetaeva and her family lived in exile during the Russian Revolution for seventeen years (1922-1939). They lived in Berlin and Prague before settling in France in 1925. 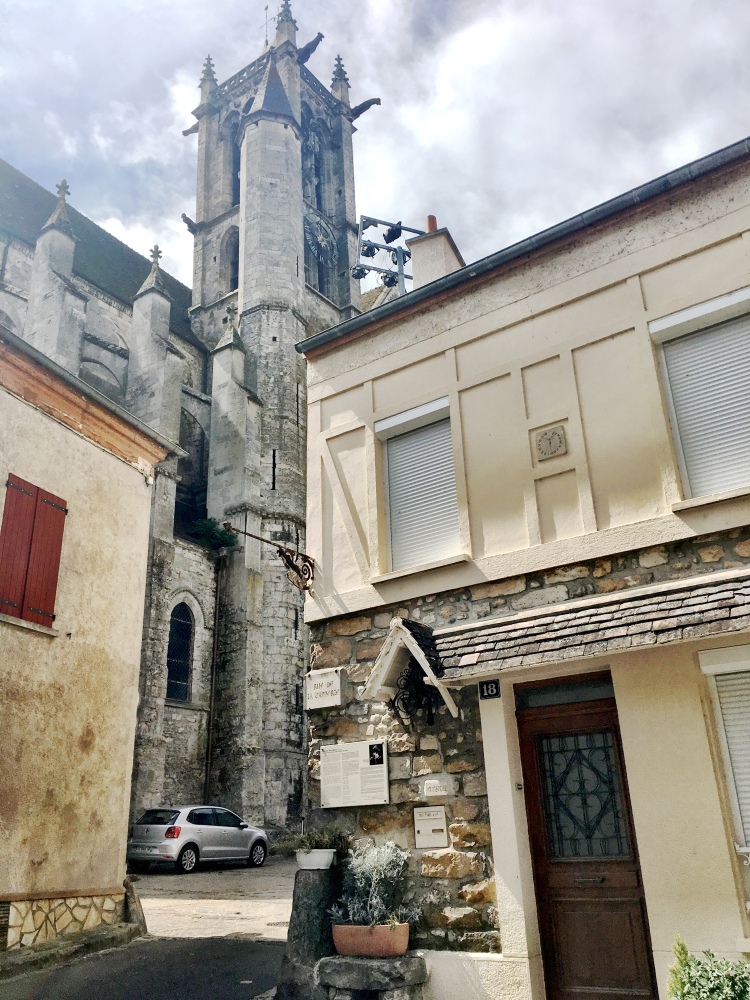 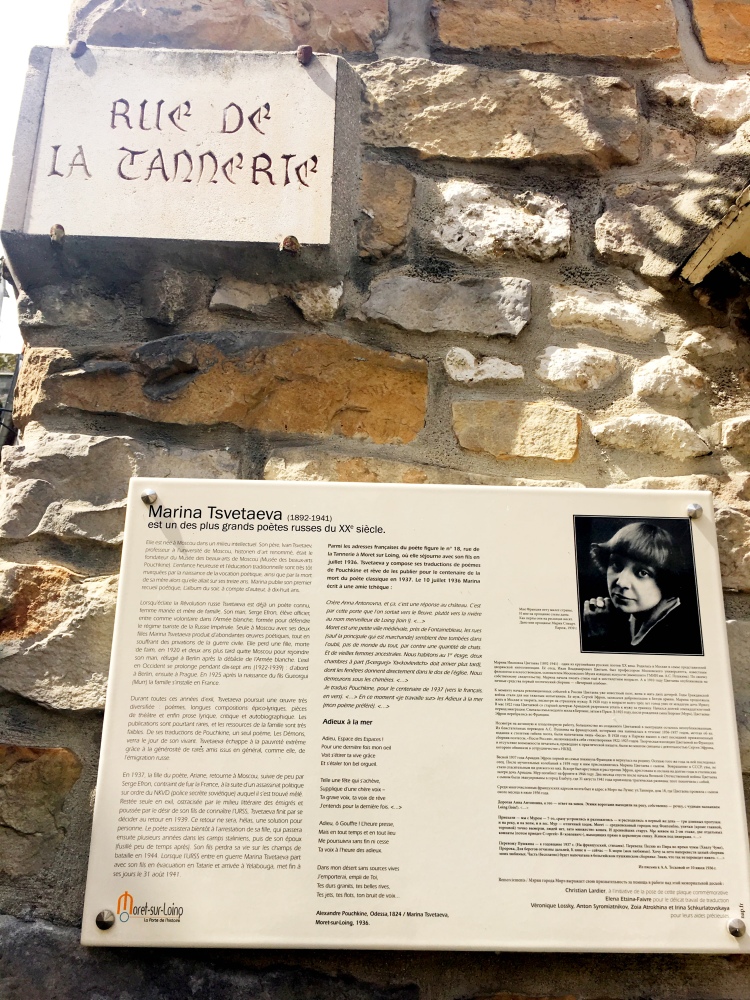 Out of all of the French villages I had visited so far, I felt the most personal connection in Moret-sur-Loing. I finished my afternoon in the town by getting a brie sandwich at a boulangerie and ate along the river, taking in the storybook views and the tranquil sound of the river. It was nice to see that there several other people sitting nearby who had the same idea. 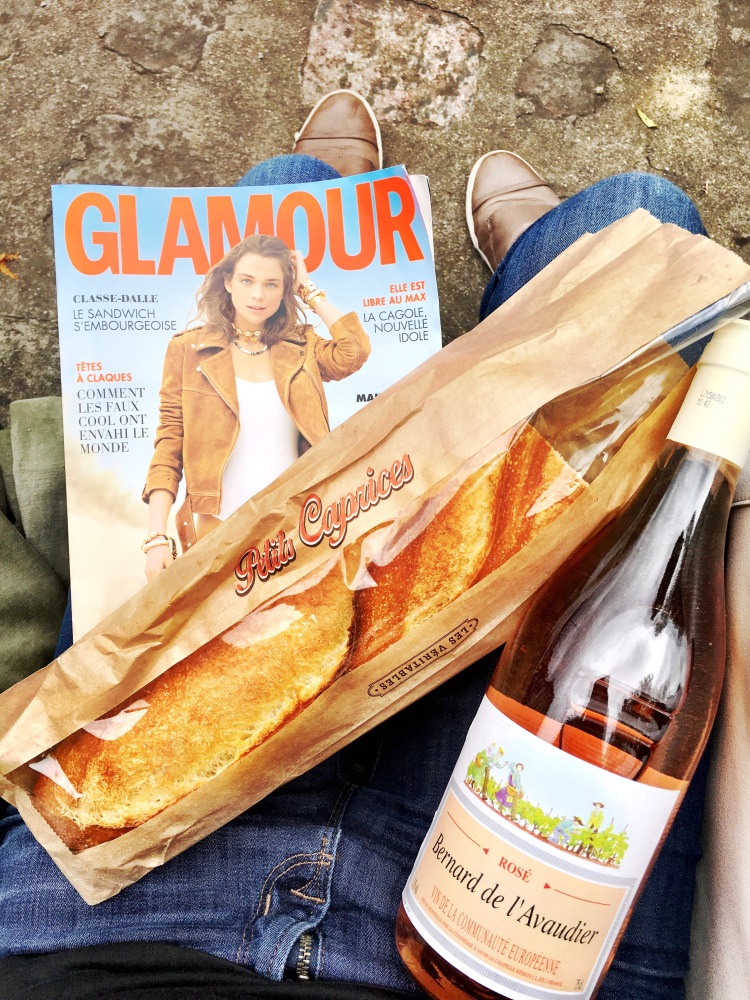 Where is your favorite place to explore outside of Paris?