I wasn’t prepared when I experienced a French family meal for the first time—it happened to be the first time I met my boyfriend’s family, less than 72 hours after landing in France.

To say that I was nervous would be an understatement. I fought every impulse to reach over the table and keep the bottle of champagne next to me as a security blanket.

My boyfriend had told me about the weekend lunches he ate home with his family, but I never understood the incredible amount of effort behind the meal. His mom goes to the baker, the butcher, the market and the supermarket to get all of the ingredients she needs before preparing lunch—this easily takes a few hours, even with an early start in the morning. Then there’s the whole part when it comes to actually preparing the dishes…

According to my boyfriend, his family lunches were “casual,” but since it was also a birthday celebration for my boyfriend’s younger brother—planned well in advance before I booked my plane ticket—an obligatory effort was put forth to make it more special.

An Unofficial Overview of the French Meal Courses

A Sunday meal with a French family is like Thanksgiving, except there are more courses, less carbs, wine pairings that actually make sense and ample amount of time to digest everything in between.

The French approach to eating a meal requires more patience and endurance that is unsurprisingly more rewarding for the American accustomed to speed and quantity—going through the courses can easily feel like a culinary Olympics.

Flipping through mental notes I’ve taken over the past few weeks, I’ve been able to gather that the structure of the traditional French meal is something like this:

Learning to Cook French at Home

In the United States, I’m used to cooking only a main course with sides, served at the same time, but I’ve adopted the French meal structure back at our apartment in Neuilly-sur-Seine. Obviously it’s less intense than the Sunday meal—I only go to our local Monoprix once a day and the market when I want a certain cheese or fresh rotisserie chicken.

Depending on the day, the grocery store can be my best friend or greatest enemy.

It didn’t take long to find out that some things I’m used to eating and drinking in the United States (kale, green kombucha, aloe vera, #ThingsWhiteGirlsEat, etc.) are hard to come by, but I’ve come to love a lot of fruits and vegetables that I never really ate in the U.S. because they’re more fresh in France.

However, there are moments like when my poor boyfriend witnessed me have a *slight* breakdown when I couldn’t find beef. It turns out that I was looking for packages with “boeuf,” but the French names for different types of beef don’t actually include the literal word “boeuf.” 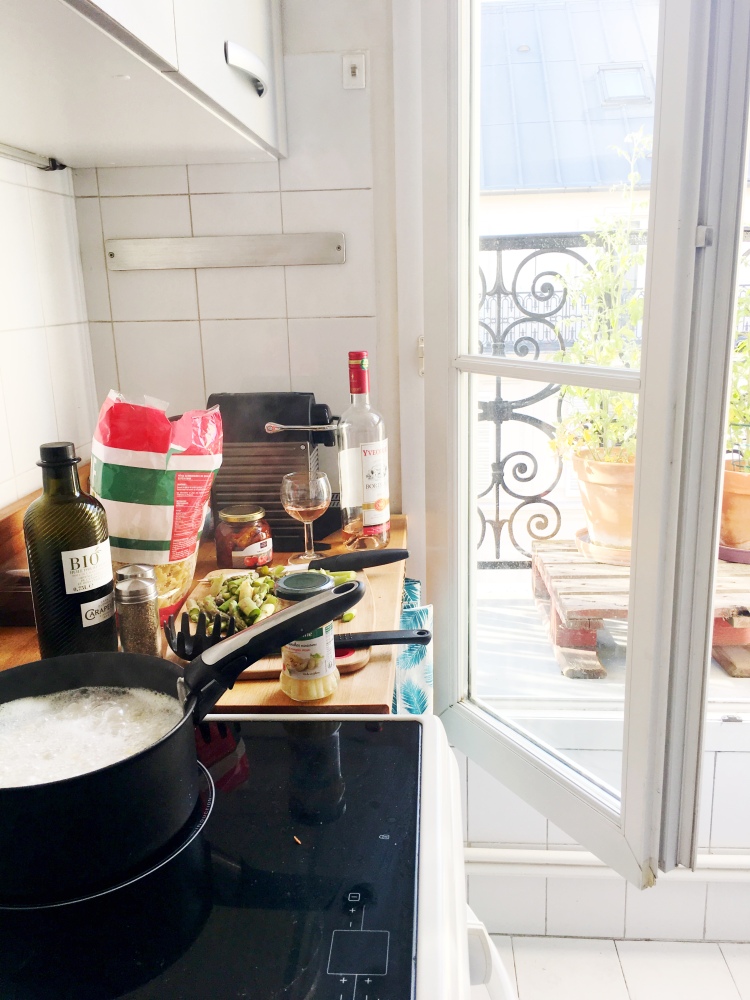 The positives of learning how to use uniquely French ingredients like crème fraîche and herbes de Provence certainly outweigh any frustrations I may occasionally have looking for the right cut of meat.

My boyfriend received a huge cookbook from his friends, so we’ve been picking a lot of meals from there. Cooking a lot of pasta and potato dishes with greens may not be the most French approach at the moment, but I plan on working towards it eventually.

We typically start apéro with cherry tomatoes, chips or saucisson, then move on to the main plate, cheese and dessert.

Some of the main plates aren’t exactly photogenic, but all of them delightfully fulfilled our appetites:

Farfalle with white and green asparagus, grilled tomatoes, arugala and parmesan– the recipe calls for any pasta, I was just craving some bow-ties at the moment

Turkey cutlet with arugala and oven-baked eggplant, zucchini, crème fraîche, mozzarella– The original recipe for the eggplant/crème fraîche required larger eggplant slices, so I improvised by cutting up the zucchini in the fridge to make the dish more substantial 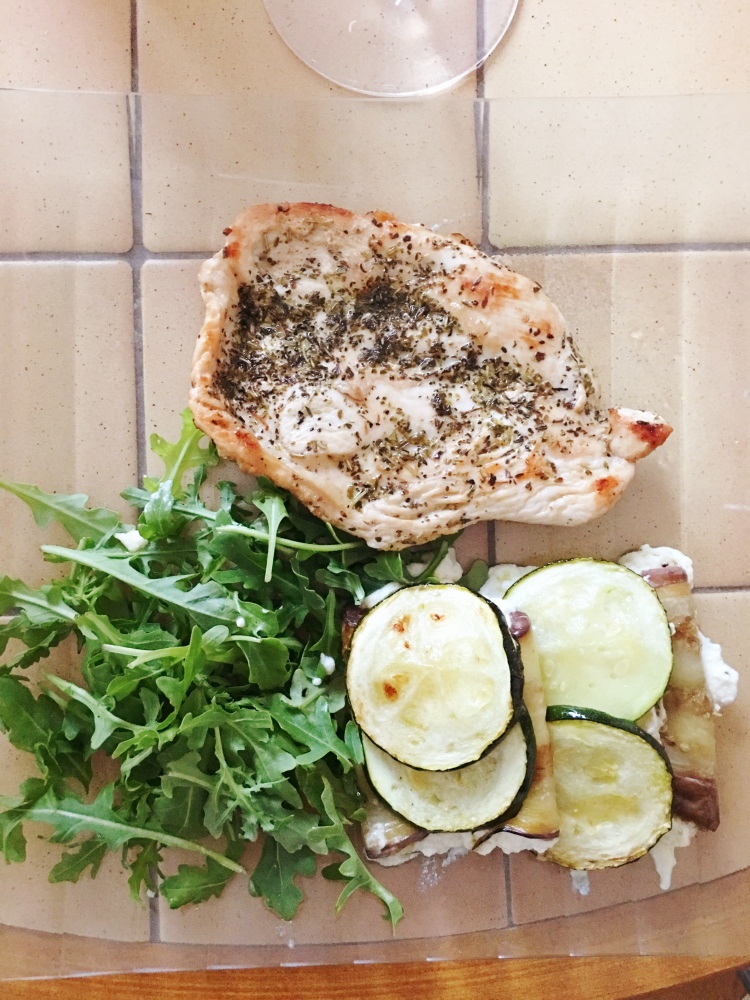 Mustard tarte served with arugala– For eyeballing the ingredient amounts, it came out surprisingly well. The only thing was that the pan was slightly too large and the top of the quiche looked burnt, hence the absence of a decent photo

Tagliatelle carbonara with crème fraîche, bacon bits, zucchini and parmesan cheese- My boyfriend likes to joke that we eat vegetarian all of the time—aka he misses eating steak on a daily basis—so sometimes I like to make dishes that are nearly vegetarian and include only a slight suggestion of meat 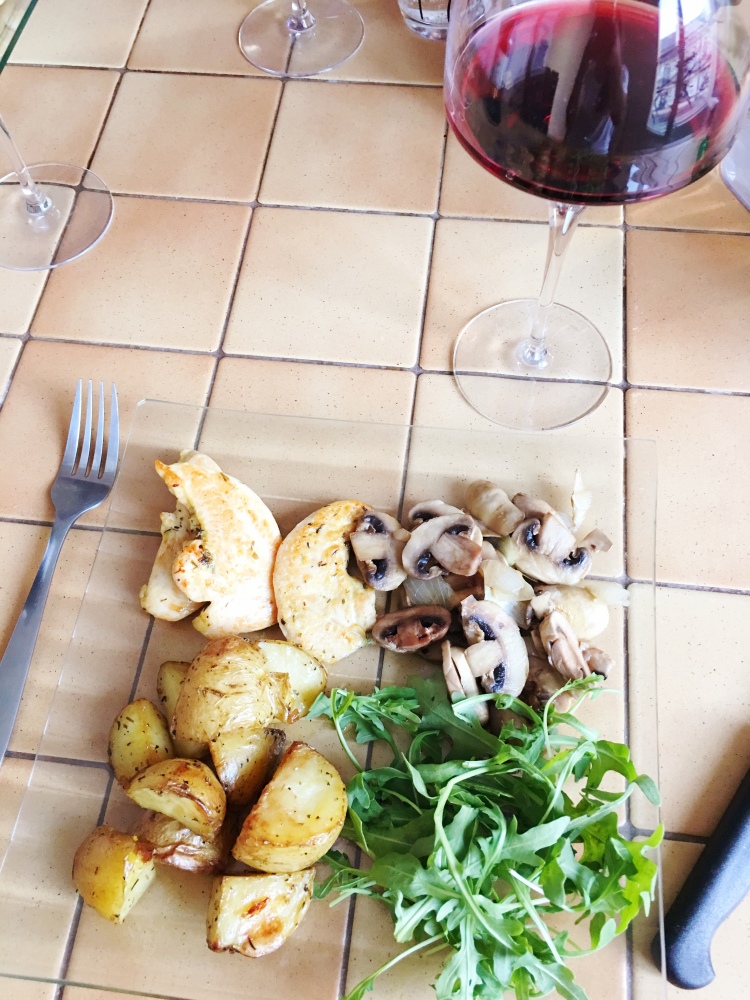 Fresh tagliatelle with mushrooms, onions, tomatoes– I had leftover vegetables from previous dinners and threw them together with fresh tagliatelle I bought at the market

8 thoughts on “Trial by Fromage, Learning the Art of the French Meal”

🌸💕
May flowers at home 🌸
How to Celebrate Earth Day ⏩
Flamingos at the Flamingo 🦩
Ciao! 🇮🇹
A change of scenery, brought to you by Horseshoe Bend, the Glen Canyon Dam, Lake Powell, and Antelope Canyon 🌄 If you’re looking to get out of Las Vegas for the day, I highly recommend taking this trip lead by @coexistwestcoast. Fingers crossed that Nate is your tour guide!