Explore Château de Chambord, the crown jewel of the Loire Valley in France

Château de Chambord is an architectural masterpiece. The castle was first commissioned by François I in the 16th century as a hunting lodge. The young French king was known to be an ardent patron of the arts, which would explain his desire to have a grand estate with beautifully intricate, well-labored architecture.

Today, Château de Chambord remains as the prime emblem of the French Renaissance.

When my boyfriend and I visited Château de Chambord, we found ourselves driving through the king’s forest for quite a bit between the initial entrance and the actual castle… If you love the outdoors, you’ll be happy to know that there are many nature trails for biking and walking.

I didn’t even get out of the car before gawking at the château’s beauty. The size is impressive, but what makes Château de Chambord look so picturesque is its symmetry and “complete perfection.”

Many other French châteaus have had noticeable exterior additions that reflect the time period of its construction—you’ll notice that Chambord’s architectural design is uniform. 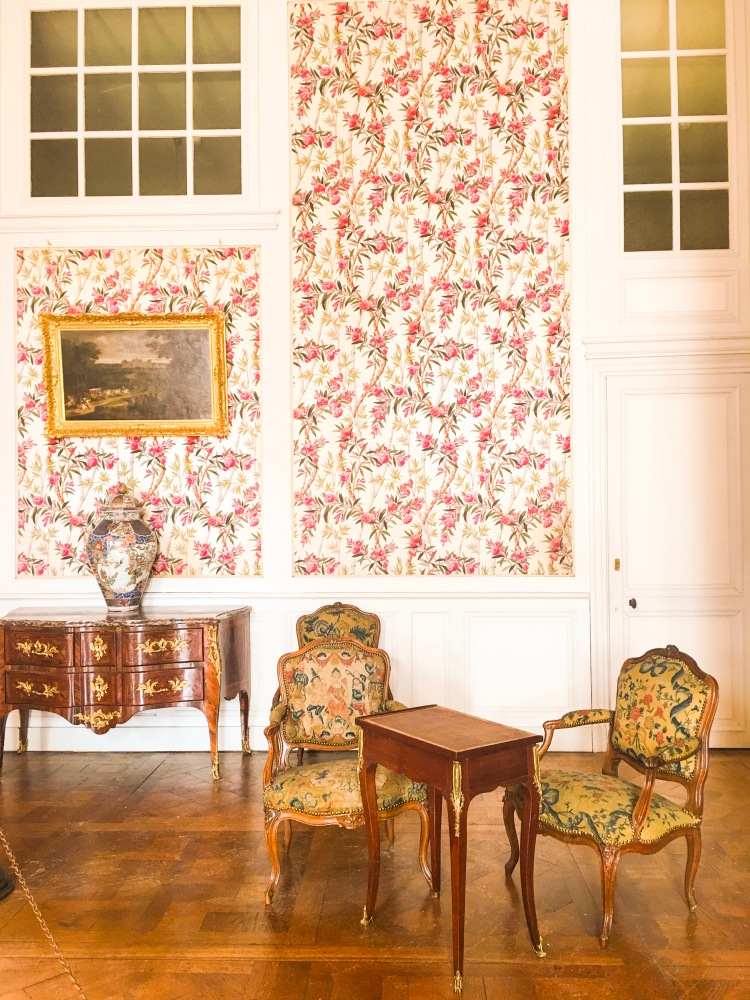 Honestly, there isn’t much to see on the inside of the château. Why?

Only a few of the rooms are furnished for display, but it’s actually a realistic depiction of Château de Chambord since it was only furnished when François I was present during the few weeks out of the year he spent time there. In addition, at some point during the 20th century, the furnishings from previous owners was auctioned off… If you want to learn more in-depth history on Château de Chambord, you can read this blog post.

With that being said, entering the château allows you to climb the famous double helix staircase and walk along the outdoor terraces on the upper floors.

In real life, the double helix staircase and the château interiors are nearly white from restoration. The light in the staircase looks green and can’t seem to get rid of the odd color no matter what I do to edit the photos. 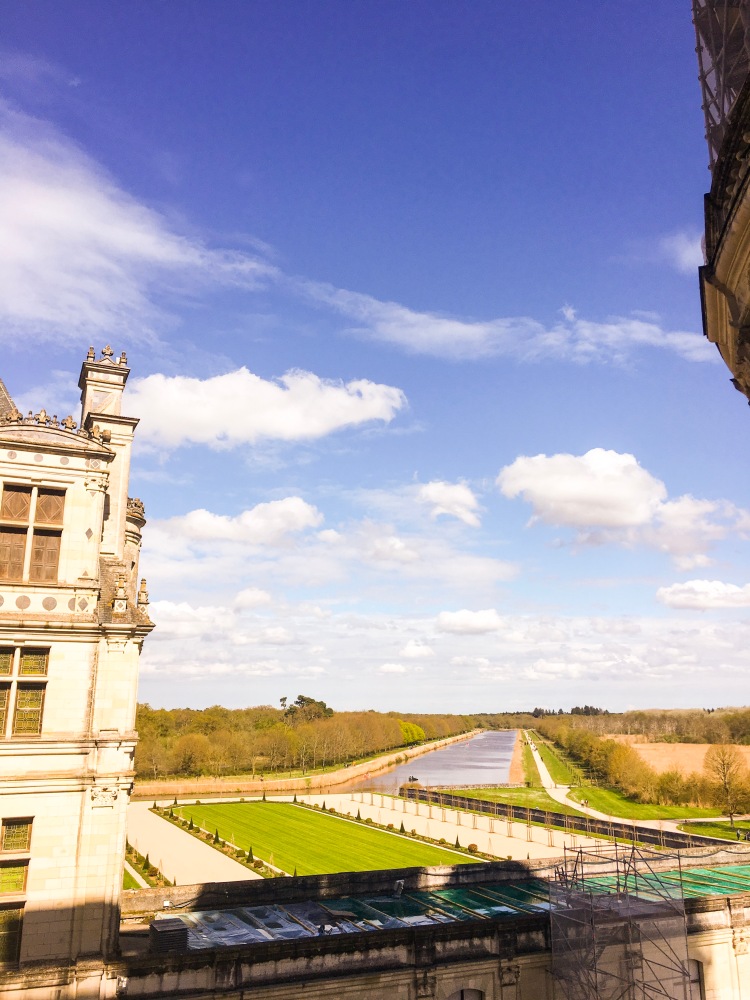 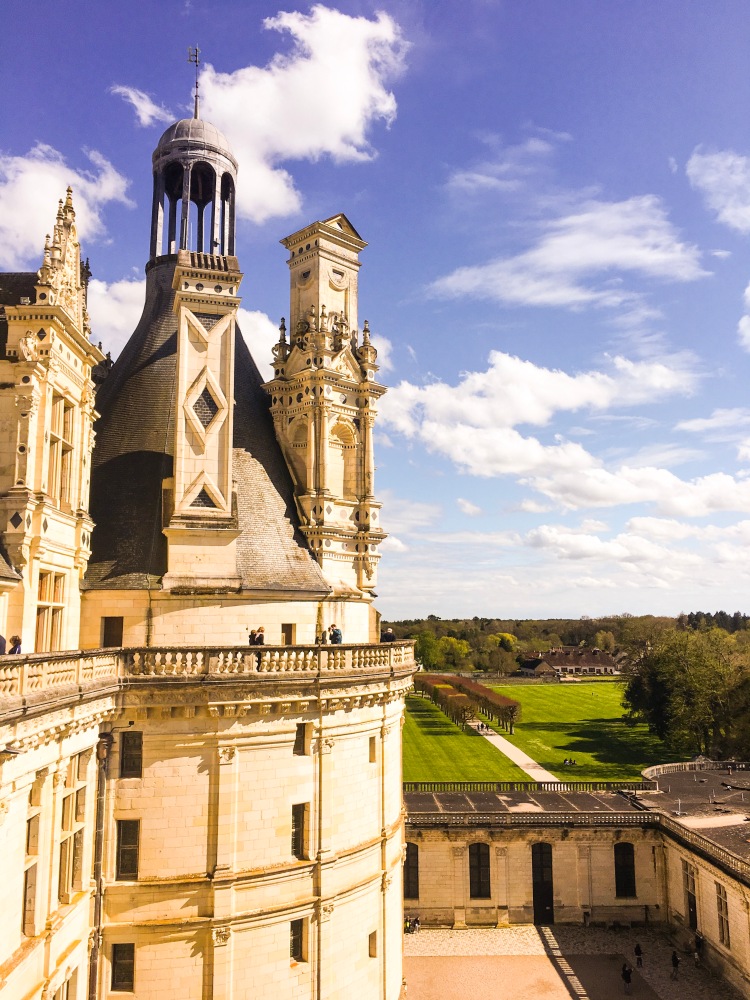 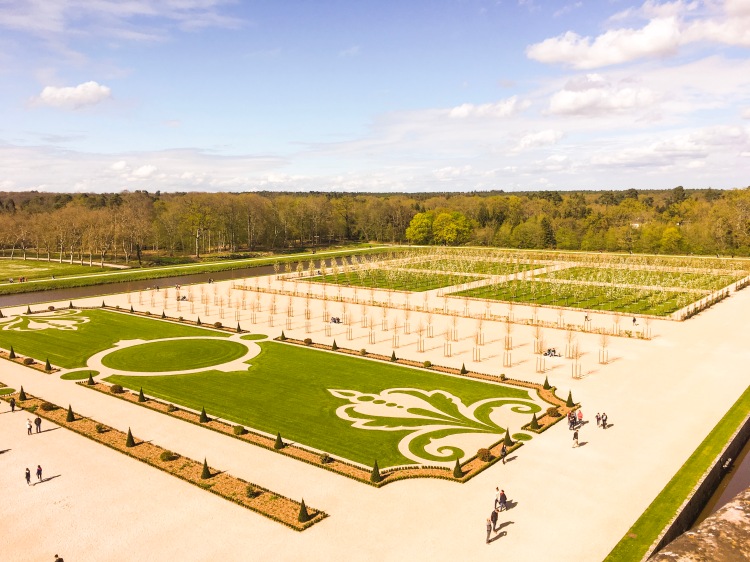 The French formal gardens of the château were recently restored in 2017.

According to the project’s press release, the restoration first began in 2003 with an initial study, followed by in-depth historical research, archaeological and geophysical surface surveys, planned archaeological digs, as well as the final design implementation in 2016.

The project is exemplary of the French-style formal gardens of the mid-eighteenth century. They were laid out on an artificial platform, on which construction began in the seventeenth century, but which was only completed in the following century. The château and gardens are organized according to a principle of quadripartition, with the building as the base element; the other three “squares” form the gardens.

The parterres, made up of lawns, flowerbeds, arrangements, and quincunxes of trees or bushes, were restored to their original form and dimensions. The location of paths, aisles and side paths in the eighteenth century was also restored. Only the plant species had to be adapted to the current climate, soil and phytosanitary conditions. For example, the horse chestnut trees and box-trees formerly planted in the garden are now affected by disease; they have been replaced by similar varieties to preserve the esthetic.

We didn’t take the time to walk all around the château grounds, but I would highly recommend doing so if you visit on a sunny day! 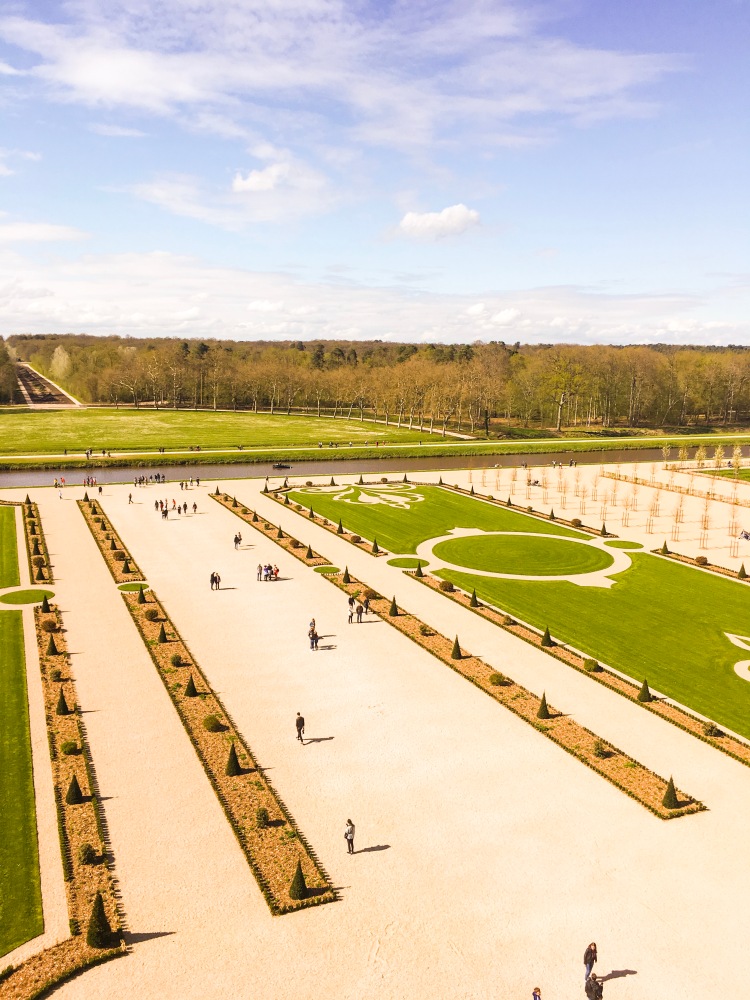 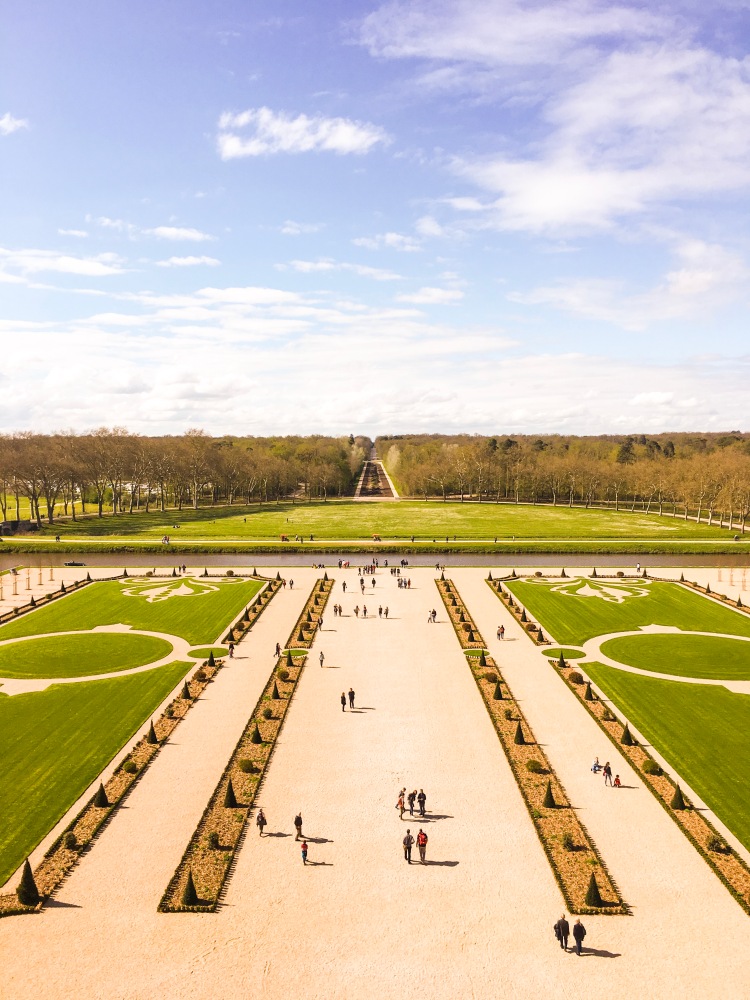 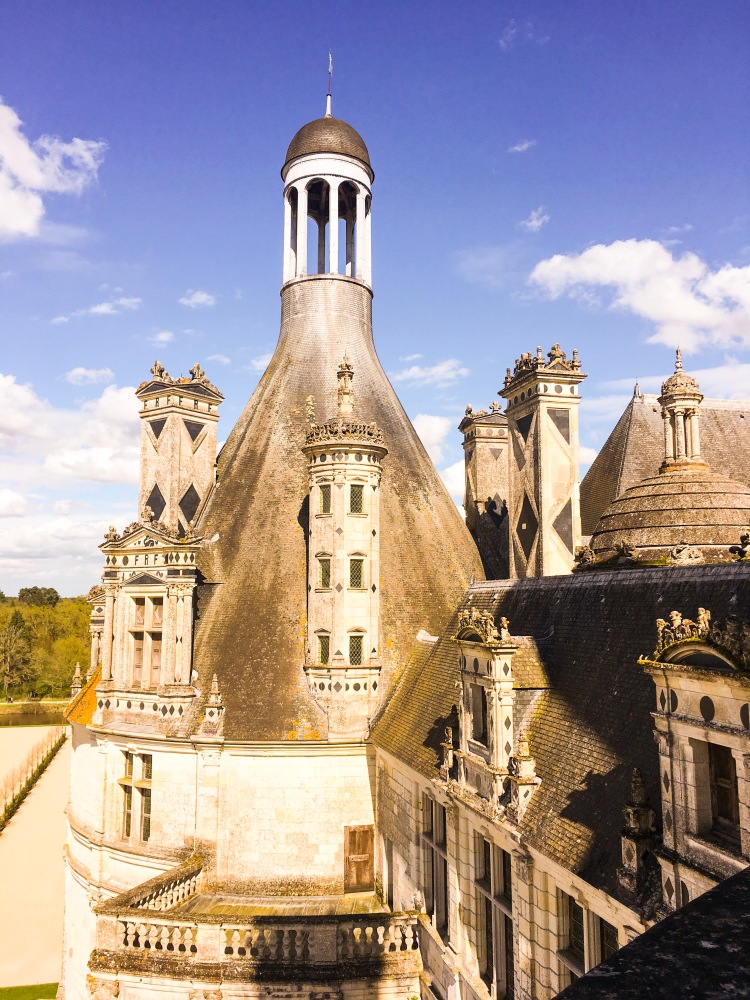 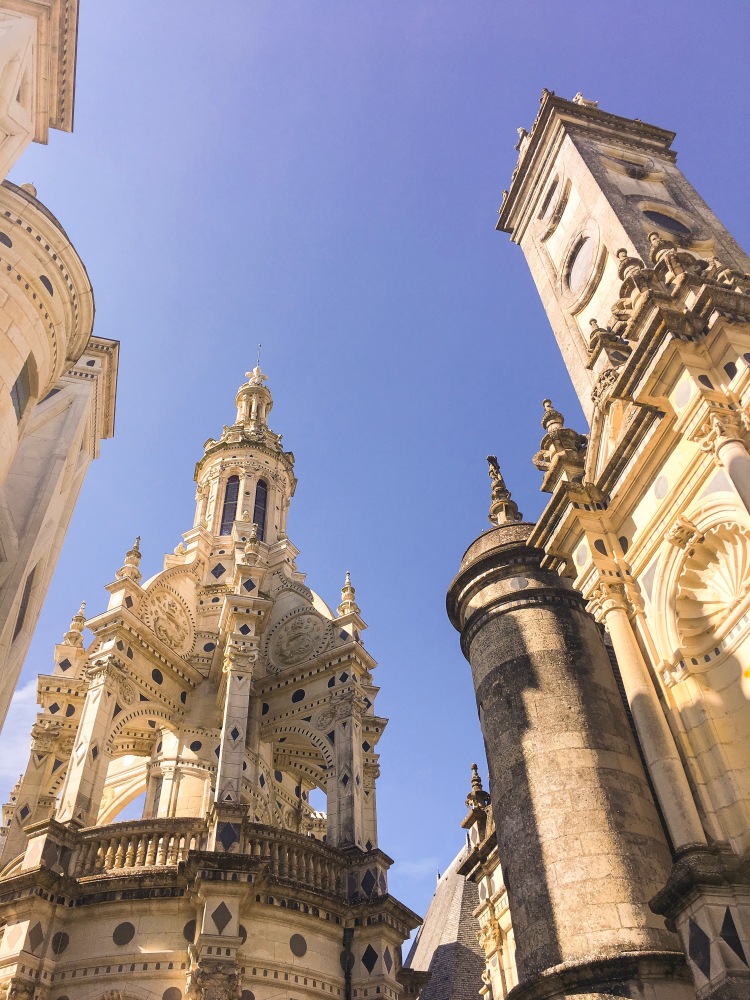 It’s clear that preservation is a priority at Château de Chambord. There were a lot of scaffolds around different parts of the château’s exterior, as well as a few temporarily closed-off rooms that are normally open for public viewing. There is a noticeable improvement between the spaces that have already been restored and the ones in progress.

We ended our visit to Château de Chambord buying some cookies from the Biscuiterie Chambord shop and, of course, a wine tasting of different wines from local Cheverny region.

Visitors have the option of tasting the Wines of the Day for free or tasting any three types of wine from the electronic dispensers for 4 euros. If you opt for the latter, you also get to keep your wine glass.

It’s easy to see how Château de Chambord is one of France’s national treasures and holds an international recognition for its stunning architecture.  With the ongoing restoration projects, it will be exciting to see how the château will continue to perservere through time. 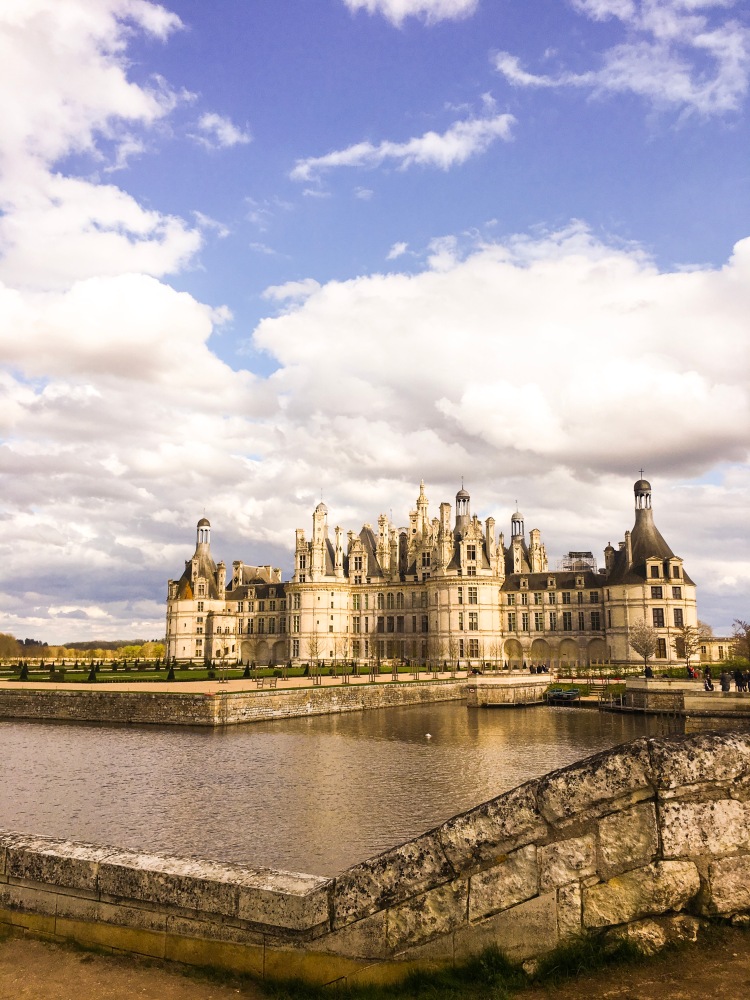